From metabolic_network
Jump to navigation Jump to search

Cladosiphon okamuranus is an edible brown alga cultivated around Okinawa, with 20 000 tons of fresh weight harvested yearly, representing around 4 billion japanese yens in 2006. Its draft genome sequence was published in 2016 (Nishitsuji et al., DNA Research). The paper describing this GEM reconstruction in more detail was published in 2019 (Nègre et al., Antioxidants). In this study, extensive manual curation was performed on the carotenoid biosynthesis pathway (CAROTENOID-PWY) and on the first cycle of xanthophylls (PWY-5945). In a follow-up study (Girard et al., in preparation) we are now curating the sterol biosynthesis pathways, and also the biosynthesis of mozukulins, specialized steroids so far identified only in Cladosiphon okamuranus (also known as "mozuku" in Japan).

The photograph used here is cropped from a work by Mr. Kenji Iwa, published as CC BY SA 4.0. The original version can be accessed in this paper.

The automatic reconstruction of Cladosiphon okamuranus results in a Genome-scale Metabolic Model containing 3390 reactions, 2255 metabolites, 5373 genes and 1403 pathways. This GeM was obtained based on the following sources: 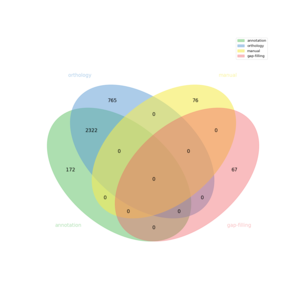